ADVERTISEMENT
Amazing Sinkholes from Around the Globe 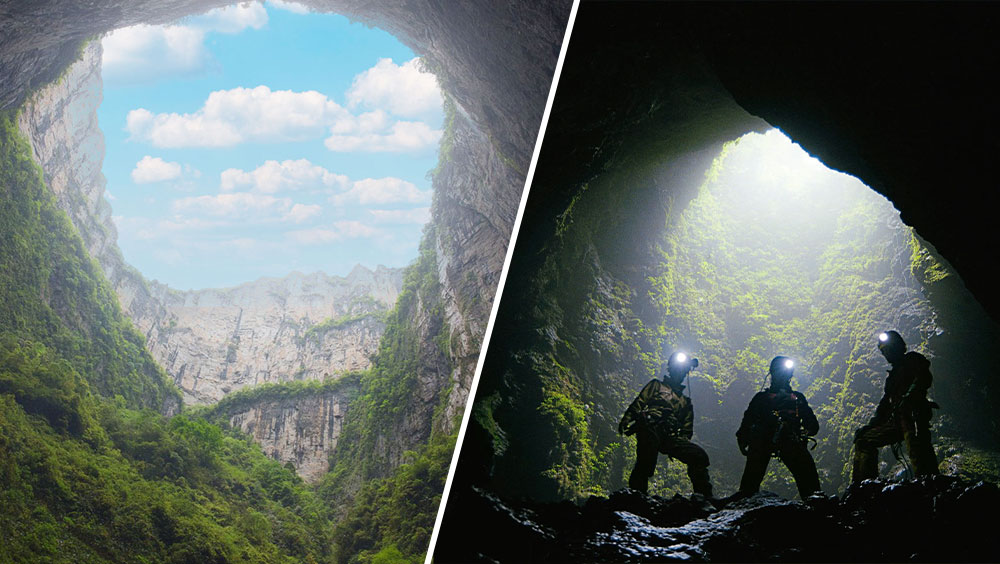 Sinkholes are gaping holes caused by a collapse of the Earth’s surface. Found across the globe, some sinkholes stretch hundreds of meters into the ground. Here are some of the coolest sinkholes around the world.

Xiaozhai Tiankeng in Chongqing, China, is the world’s biggest sinkhole. More than 600 meters wide and equally as deep, the chasm is home to an unusual in-ground forest.

Dragon Hole in the South China Sea is the deepest underwater sinkhole across the planet. Reaching down for more than 300 meters, the sinkhole creates a striking dark blue circle in the ocean.

Teiq Sinkhole in Oman is a spectacular sight, with two cascades tumbling over the edge. Measuring 1,000 meters across at its widest point, it’s among the largest sinkholes in the world. Also in Oman, visitors can follow a concrete staircase down to the water in Bimmah Sinkhole.

Turkmenistan has one of the world’s most fearsome sinkholes: Darvaza Crater. Deep in the desert, lava burns brightly around the clock in the massive gap in the ground, earning it the nickname of The Door to Hell.

In France, tourists can take a boat ride along the underground river that flows some 1.3 meters below ground level at the bottom of Gouffre de Padirac. The sinkhole also boasts several impressive subterranean chambers.

Sinkholes in the Americas

Mexico is known for its water-filled sinkholes, known as cenotes. El Zacaton is one of the world’s deepest water-filled sinkholes, reaching almost 340 meters deep. A verdant floating island bobs across the water’s surface. The Cave of Swallows is famous for its abundant bird life. The mysterious Ik Kil is shrouded in sacred lore, once used for human sacrifice.

Jamaica’s Hutchinson’s Hole also has a macabre past; a mass murderer hid his victims in the chasm.

Venezuela’s gigantic Sima Humboldt, located atop the Sarisarinama mesa, splits the forest, with lush foliage growing both outside and inside the gaping hole.

The United States has its fair share of incredible sinkholes, too. The ethereal Montezuma Well in Arizona is home to five unique aquatic species, while Devil’s Sinkhole in Texas has many resident bats.